Create an Account - Increase your productivity, customize your experience, and engage in information you care about.

Every 10 years, federal, state and local district lines are redrawn based on the most recent census data. These lines determine who can run to represent us in elections at all levels. District lines should be drawn to ensure fair and equal representation for all residents.

It is the responsibility of Georgetown County Council to update the seven county council districts. These lines determine representation for county residents on the County Council, as well as the Georgetown County School Board. Georgetown County received census data in late September of 2021 that allowed it to begin the process of redistricting. The county contracted with the state office of Revenue and Fiscal Affairs (RFA) to guide it through the redistricting process and create draft maps of the new Council districts for Council consideration. Information the RFA used to redraw district lines is available in the report below. 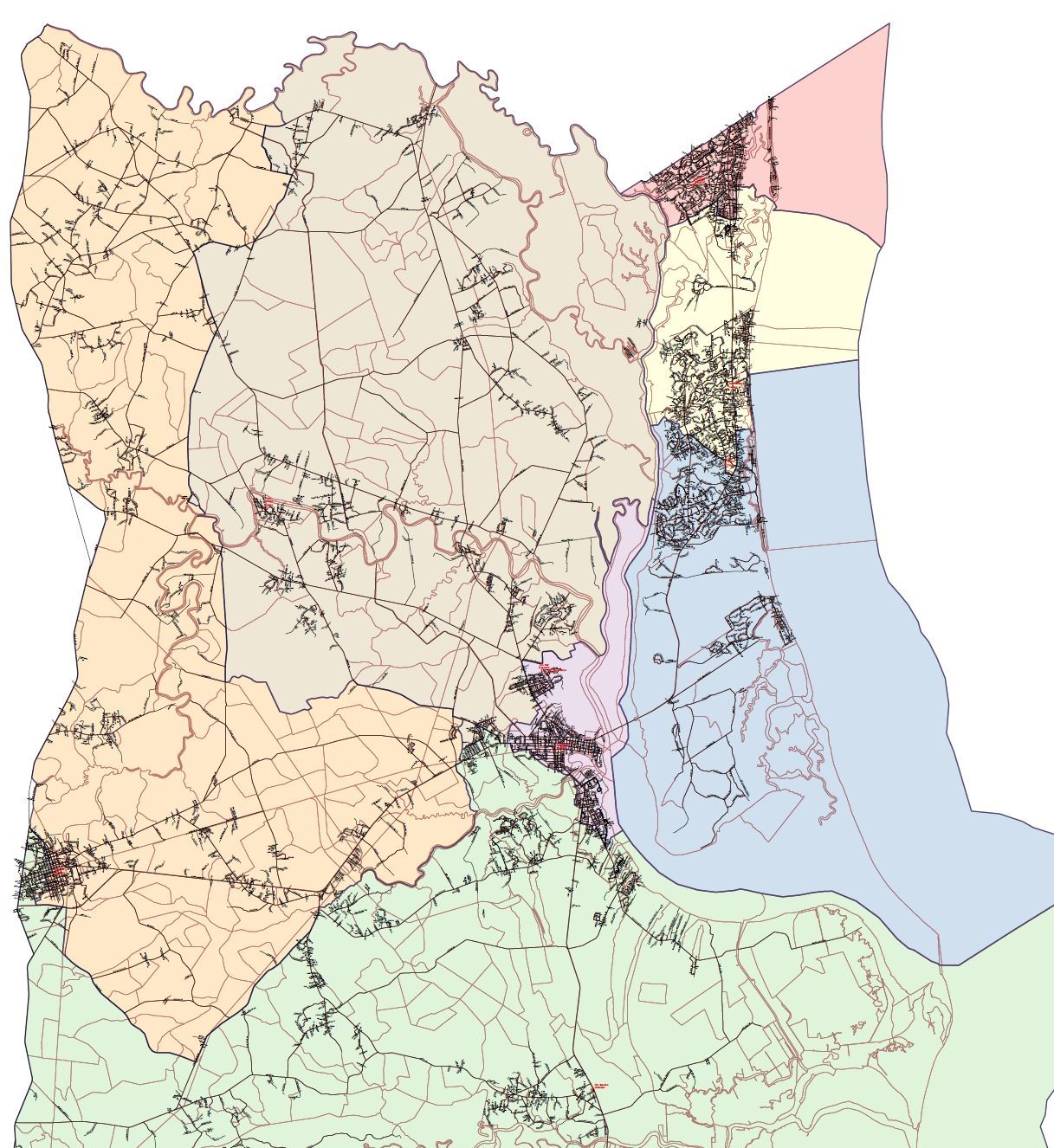 The most significant differences between Map 509 and its predecessor, Map 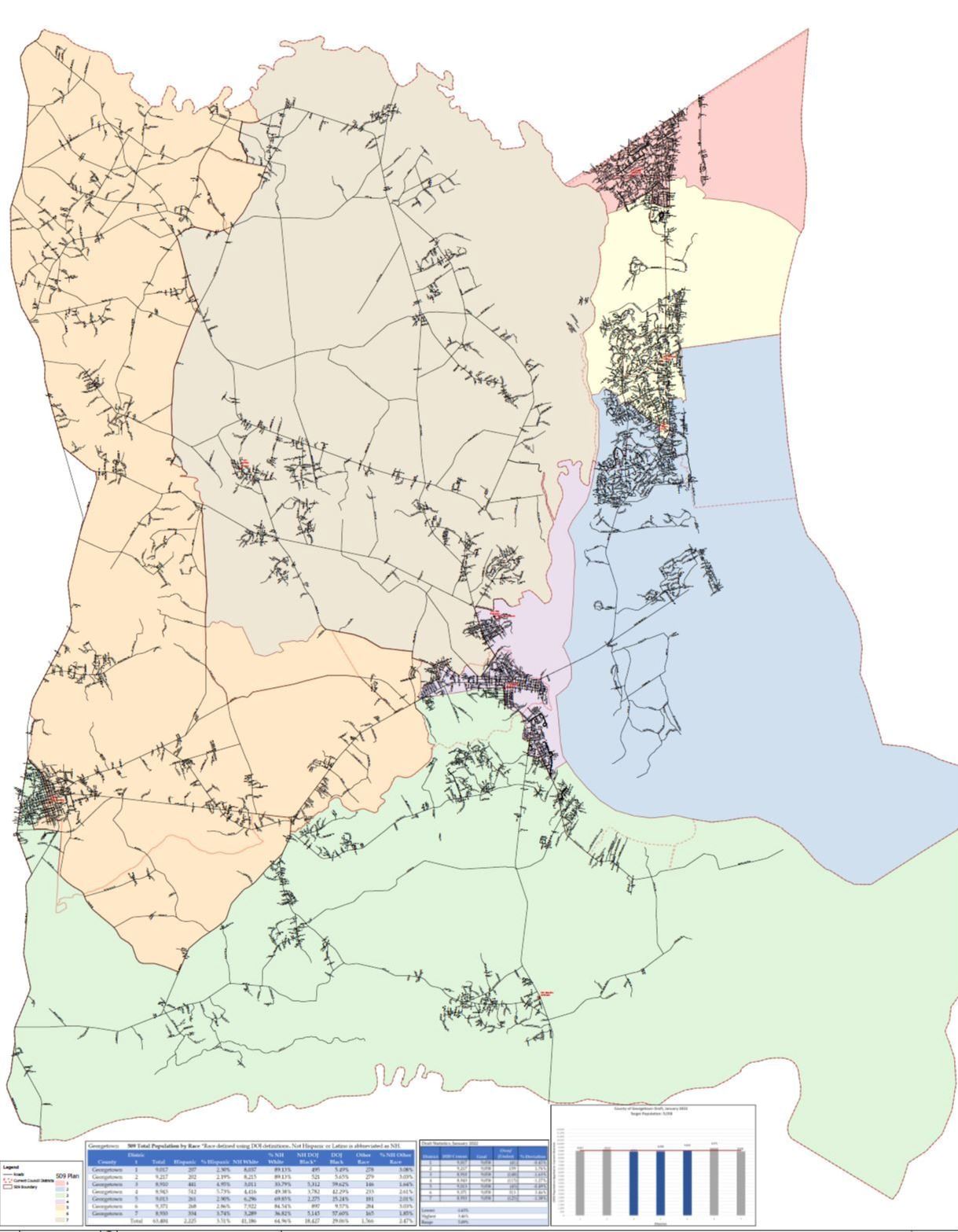 843A, are that the new map has a significantly larger minority population in Council District 4 and a majority of the City of Georgetown are brought back into one district. These were the two changes most requested by residents based on public input.

Two maps showing options for federally mandated redistricting were drafted by the State office of Revenue and Fiscal Affairs (RFA), and delivered to Council in mid-December, 2021. After reviewing the two maps and having individual meetings with County Administrator Angela Christian, it was clear Council had a definite favorite: the map labeled Plan 1-843. However, all of the council members had concerns about various aspects of that map. Those concerns and feedback from each council member were used to create a third map, 1-843A.

Key considerations in developing the maps are as follows:

The 2020 census saw the county’s total population increase by 5.4%. Just under 30% of the county’s population is minority. The RFA told the county the new maps were a challenge due to “the compactness of the minority community.”

Highlights of each draft map and changes in comparison to current district lines are as follows.

If you have questions that are not covered on this page, please send an email to redistricting@gtcounty.org.

If you would like to submit a public comment regarding the proposed redistricting maps, or the redistricting process in general, please use our Redistricting Public Comment form.

A brief video tutorial of how to access redistricting maps and other information via the County's GIS system is below.

Every 10 years, districts on the federal, state and local levels must be redrawn to ensure each district is substantially equal in population. This process, called redistricting, is important in ensuring each fair representation for every person. Georgetown County is responsible for drawing County Council Districts. School Board members also use the same district lines as County Council. On the county level, redistricting helps ensure every council member represents the same number of constituents. Based on the 2020 census, every Georgetown County Council district should have as close to 9,058 residents as possible.

Why should I care about redistricting?

Redistricting determines which neighborhoods and communities are grouped together into a district for purposes of electing a council representative. The County Council will seek input in selecting the next district map, which will be in place for the next decade. You have an opportunity to share with Council your thoughts on how district lines should be drawn to best represent your community. Three public meetings have been scheduled to present draft maps and gather public input. Public comments may also be submitted online at gtcounty.org/redistricting. Public input meeting dates are as follows:

How can I view draft redistricting maps?

In addition to being on display at public input meetings in January, the three draft redistricting maps are available for the public to review and comment on at gtcounty.org/redistricting.

How can I view the current council district map?

The current council district map is available as a layer on the county’s GIS mapping system and can be accessed via gtcounty.org/redistricting. The current map can be overlayed over the draft redistricting plans to allow residents to compare the two in detail.

How will Georgetown County notify the public about redistricting?

The county has set up a web page at gtcounty.org/redistricting to make it easy for residents to find the latest updates and all the information they need about redistricting in one place. Through its public information office, the county is also working with local media and using social media and other platforms, such as its monthly newsletter, to put information into the hands of the public. Updates are also being posted to the homepage of the county’s website and directly emailed or text messaged to residents who have signed up for news alerts and notifications from Georgetown County. Public meetings are being held in communities across the county. Recordings of these meetings are also being made available online at YouTube.com/gtcountysc to allow as many people as possible to watch the meetings and submit their comments on the redistricting plans.

How can I get involved?

Georgetown County wants as many residents as possible to be involved in the redistricting process. Residents can be involved by attending one of the following public meetings:

What are census blocks and how do they figure into redistricting?